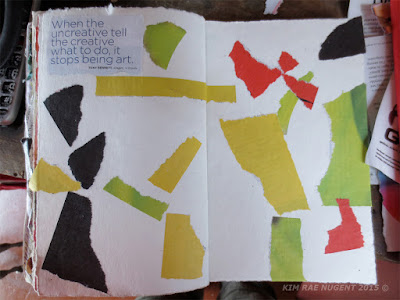 I was inspired by a torn paper collage journal page spread by Marie Danti.  I started with this quote "When the uncreative tell the creative what to do, it stops being art". Next I ripped out mostly solid sections from a magazine and glued them down without preplanning. Pieces laid prior helped to guide the next paper I glued down. I didn't have a plan for the subject matter except to draw something in marker loosely. Tony Bennett was the source for the quote so I googled an image for him and liked the pose from his All Time Greatest Hits album. 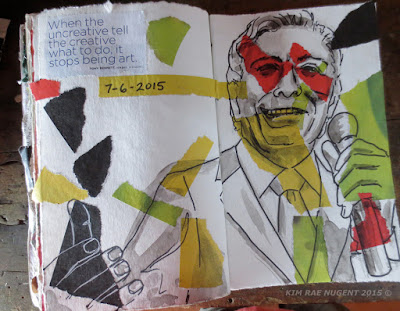 The drawing isn't as loose as I had first intended.  Since it was an actual person I wanted there to be some resemblance. First I sketched the image in pencil. Next I drew over the pencil lines with marker. Then I painted in shadows with watered down acrylic paint.

I think the random collaged paper gives the spread more of a dynamic energy than I could have planned.
Posted by Kim Rae Nugent at 8:37 PM

Newer Post Older Post Home
Subscribe to: Post Comments (Atom)
Don't think about making art...just get it done. Let everybody else say whether its good or not...and while they're deciding...keep making more art.
Andy Warhol

Kim Rae Nugent
Kim is a mixed-media artist/teacher from Fredonia, Wisconsin who enjoys sharing her passion of the creative process. She is the author of Journal Starters: Sampler Volume 1, the first in an upcoming series of Journal Starters books. Her first book Interactive Art Workshop: Mixed Media in Motion is published by North Light. Kim spent her life cultivating her skills in visual journaling, collage, oil painting, sculpture, sewing, altered books, assemblage, jewelry and preserving family memories. Kim often cross pollinates mediums for unique and exciting projects. Her love of family, nature and animals is often reflected in her art. She believes that it doesn’t take a degree or a style of realism to be an artist, only a desire, and wishes to instill that belief in her students.

Courage, strength, fortitude. Power not arrested in the act of judgement, but passing on to further action, sometimes obstinacy.

This is a card of courage and energy. It represents both the Lion's hot, roaring energy, and the Maiden's steadfast will. The innocent Maiden is unafraid, undaunted, and indomitable. In some cards she opens the lion's mouth, in others she shuts it. Either way, she proves that inner strength is more powerful than raw physical strength. That forces can be controlled and used to score a victory is very close to the message of the Chariot, which might be why, in some decks, it is Justice that is card 8 instead of Strength. With strength you can control not only the situation, but yourself. It is a card about anger and impulse management, about creative answers, leadership and maintaining one's personal honor. It can also stand for a steadfast friend.

What Tarot Card are You?
Take the Test to Find Out.